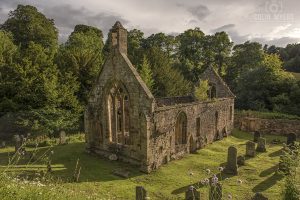 The weather had changed; darkness had turned to light and the cold nights had disappeared in favour of the warmer breeze, blowing through the ancient village from the Moorfoot Hills. The summer was almost here and the people could sense the change. The work was hard and the days were anything but easy but they worked together and they could feel a sense of purpose, togetherness and worked for the greater good, for the village.

As he walked through the village leaving the inn and the frothy ale behind, he couldn’t help but wonder if it was time to take another look. Those stories and tales, they were just fantasy. The tales he would hear of an evening, sat by the roaring fire with dram or a frothy ale, gathered around the old barrels and listening so closely, as if his very life depended on it.

They would talk into the small hours about the noises. The old place was alive, carried by the souls of the lost, the downtrodden and the defeated. The whole place would move as the darkness fell on the village and the old kirk of Balantradoch was the epicentre of the movement, the life, the noises. It would heave under the enormous weight of the departed, long since gone though a sense of something or someone remained, long after they perhaps should or beyond when you might expect to feel.

The whispers would be heard long into the evening as the summer sun gently fell over the ancient stone. The kirk was long since abandoned, the new kirk built a little way from here yet the old place called the villagers, almost by name and beckoned them forth to see and to hear and to feel, for themselves. He remembered the uneasy feeling this brought him, not unlike the traps he would set for the fox who ravished his flock. The whispers were not pleasant and there was something malevolent, he was certain. Something bringing the whole place down to a different place. He would tread carefully. He would satisfy his curiosity once and for all and he would listen. It may well be the last thing he would ever hear.

He gulped and took a deep breath as he opened the gate to the old kirkyard, the view opened in front of him was nothing but serenity and peace. Calmness personified and not a hint of anything sinister to be seen or heard. This, was as he had expected. The gate closed quickly behind him, the clouds gathered and then the whispers came…