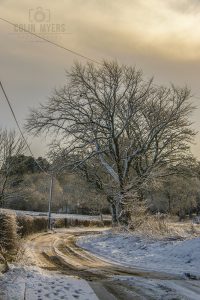 He had walked for almost an hour when he took his rest, catching his breath as he used his knees as a makeshift leaning post in doing so. He could see his very breath form in front of his face, almost crystallising into little droplets, almost solid and tangible, formed in the cold winter air. The seasons had changed rapidly and he didn’t really remember the autumn too well; it come, it went and they seemed to have been plunged into what felt like an almost eternal winter since October.

The cold didn’t really bother him though and he had no concerns with the fresh, crisp Midlothian air that filled his nostrils and cleansed his soul. He would face ten hours deep underground, working the pit, almost as a man possessed, on the coal face and with the shovel and pick axe, he and thee almost one, perpetually and with no change to that pattern in sight. The work was hard, the hours were long and the friends lost were many. Things were difficult and never more so when he would say goodbye to his wife and make the journey to the village, ready to start his penance for a pittance, yet, this was the only way for him and so many others.

But sometimes, just sometimes, the walk was welcome. Sometimes that walk through villages, fields and over the old railway lines was just what he needed. The air was clean and there was no explosions to deafen his ears, no screams and no wretched canary. It was just him, at one with the Midlothian countryside. It was, on such rare occasions, absolute bliss. As the sun would rise over the Moorfoot Hills, the fields would be kissed with golden sunlight and the rays would beat down on his back in the most welcome of natural massage. The water in the stream would run gently, down through the Fullarton Burn and the morning due would alight with the sun on the case. Birdsong would fill the air and for just a short time, the world would be a better place; the hunger pangs he felt would burn a little less intensely and the worries of a man, tasked with his concerns would be momentarily just a little less intense.

The snow had come and it had come with some ferocity. It had hammered down on the tiny cottage he shared with his wife and four children that very evening before. But, it had stopped. It always stopped in the end and when it stopped, it left a magical blanket of soft white glistening pearls, treacherous under foot and no fun when shelter was needed and the coal was low, nothing in the lum but dust. Today though, was the start of the season; the point at which things would start to turn. He stopped as he reached the top of hill and drew down on the pipe hard. He surveyed the scene, the path from which he had just walked and the feint sound of the pit wheel was almost ignored at this distance.

One moment in time, his moment. Nothing, nobody and not a concern in the world for just a split-second. He looked out again and took a deep breath as he started the short journey to the colliery. He would picture the scene for the next ten hours or so, picture the world at large and remember beyond the confines, beyond the hammers, the explosions, the wails and the toil, the world at large remained. He would remember and he would see it all again. It could never come soon enough.