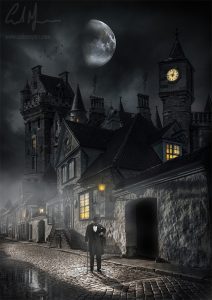 The minutes had turned to hours and the hours almost seemed endless until eventually the clock outside struck several more times than was healthy or at least, healthy for him !

There was no getting away from it; he enjoyed the frothy ale and whilst it was hardly the drink a gentleman would consume, this didn’t matter as he was no gentleman. The tavern in which he consumed the frothy ale was no more than a den of iniquity and far beneath a man of his standing in the community. Again, this mattered not to him for he had come to know his place in society and that was altogether at odds with where he choose to spend his time.

If the truth was told, he was a wolf in sheep’s clothing and the best lambs wool at that. He walked the walk and he would talk the talk, he flashed the cash and he oozed self confidence with his every move, every word, every strained relationship that was invariably more strained on him than anyone else.

For all intents and purposes, he was a fraud. He mixed with the dregs of society and yet he held his head a little higher, he would talk a little differently and he would brush aside their attempts to acquiesce at any given opportunity; he was the dregs, he was beneath the dregs and he knew this. The world at large did not know this but they would soon come to know. They would soon come to understand the extent of his lies, his debauchery, his gambling, his womanising and his general persona.

But for now, the inn was closeed, he was full of the frothy ale and he had a reputation to uphold and a charade to enact; he stepped out into the cold night air, a few lanterns still burning as the Moon overhead lit the cobbles underfoot. She would seek him and scald him for his ways. She would be waiting, ready, gnawing at his very ears as a rat foraging for his supper. She would be the predator and he, the prey. That was for the morning after the bells of St Giles had rung but seven times. For now, he would make his excuses and he would visit her; she who would never scald him, nor gnaw at his ear with her shrill, she would take him in and pour a large brandy and say no more. He would go, and waste no time. Now, and he would not look back just as the clock would strike one, he would arrive.

…he walked, stopping only to check the clock in his pocket and never a look back towards his past, strolling and staggering to the future, for now, whilst he still could…