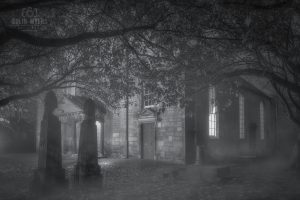 Having left the Palace of Holyrood House behind, he took to the Canongate and passed through the closes and wynds, hunting. He walked slowly, but purposefully and he left no stone unturned and nothing to chance. Meticulous and with forensic like investigation, he searched high and low, touching and probing almost every inanimate object, searching.

The White Horse Close and the inn therein was upturned and not a man nor woman left unchecked and he carried on, through the Canongate, all the way on to the Bakehouse Close. The bakers were of no interest to him though he searched the cellars, the pantry and the whole yard. He looked through the close and he checked the servants quarters in Huntly House.

And then, he stopped. As the haar thickened over the Canongate Kirk and through the ancient kirkyard fields, he seen the movement. No wind and no sounds, not a horse nor cart to be seen, the haar so thick the townspeople daren’t leave their houses for fear of falling to the thick sea fog.

The breath, a last, gasp attempt to control the quivering fear as he hid behind the gravestone, trembling, barely breathing. Watching his pursuer slowly walk through the deep arch and leave the bakehouse behind, he seen him pass the tree lined kirkyard gates and on, towards the kirk itself. His heart sunk into the pit of his stomach as the heavy iron gate was slowly dragged shut, a loud thud heard as the iron clashed with the iron attached to the wall.

Nobody was going anywhere. He would begin the search and he would not rest until he had uncovered the thief. He would find him and bring him to task, serving the justice that he sought fit and without repercussion or question from another living soul. The time was almost upon him and he knew his chances were limited. If he made it through the night, it would be the will of the Almighty and nobody else. He covered hs mouth and he waited as his fate was sealed. He waited…