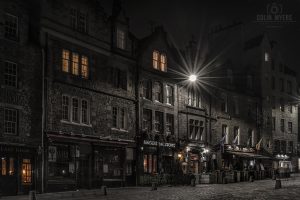 Six months had passed without incident and the people of Edinburgh had put the ugly business behind them; there was no trace of the events, no discussion to be had, nothing. It was almost as if it had never happened, as if he, had never been here.

They walked, talked, pushed carts, carried water and bought and sold the goods and provisions they needed as they always had. Not a word was spoken of that night, nothing was said and nobody dared raise the subject. The fear had grown to ensure that nothing could or would be said. The ignorance was bliss and all was good on the market.

…the nights drew in a little, the cold air rattled down the upper echelons of Victoria Street, on the West Bow and the Grassmarket beyond. The silence was broken on the Cowgate and the scream was heard by all. The scream was not a scream at all, it was not a scream and they all knew what it was. Moreover they had all heard it before and knew who it was.

The maniacal scream and the laughter of a madman was herd, reverberating the length of this old street from the Vennel at one end to the Cowgatehead at this. He was getting closer. The blood drained from their very bodies as the shrill was hard to ignore. He had returned. This couldn’t be. The long, dark overcoat was worn, black as the night with a cape to match and a shrill of laughter from within, the dark eyes and face hidden by a hat. He reached into his jacket, opening it as he went and moved to go for the inside pocket………just then…………………………