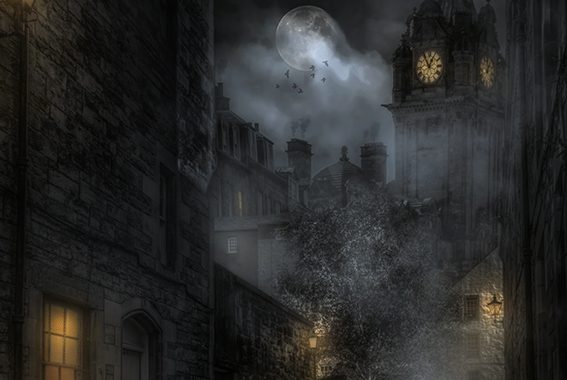 The final game had ended, his hand thrown as he just could not win. He stood up and took his leave, an empty fair well lingering around the table where he had spent the last three hours gambling everything he owned and even a few things he didn’t own.

Within an instant he was gone, making his way up the slippery cobbles of the Grassmarket and on through the Cowgate. He passed taverns and inns, full of people; eating, drinking, cavorting and which much merriment he wondered why his lucky streak had not returned; he had done all he should do, offered the needy a shilling as he passed and he had been frequenting the chapel ever more.

His luck, was due to change. He needed a change in luck. He needed something and he concluded if he didnt find it soon, he would be ruined. He would be a broken man, with nothing.

On he walked, up Blackfriars Wynd and rounded towards the Canongate. He stopped to catch his breath, leaning on the cane he carried for stability, the effects the whisky now in full flow as he rubbed his head and surveyed the scene. There was nothing more to be done at this point. He would recover his losses. He was one game away from a huge win and a lucky streak was just around the corner.

As the clock had almost struck one, he walked on, through the fog and over the slippery cobbles. Tomorrow, he would return. Tomorrow would be another day. Another game, a big win and faith in the world would be restored…

This one is going live tonight as a limited edition print. If any members want to secure a copy first, visit this link here https://www.colinmyers.com/product/auld-reekie-moonlit-fog-limited-edition-original-artwork/